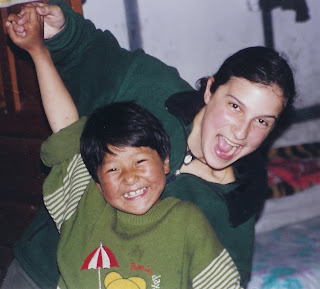 After answering an ad in the Boston Globe, I got a job as the private tutor for an American family that was traveling around the world. They took me all over, and I taught their 1st and 4th graders. It went something like this:

Nepal: I spent 5 weeks in Nepal. For about 3 weeks, I was teaching my pupils in Kathmandu. I also spent a week or so on my own, mostly in Pokhara, a small city on a lake. The family and I also spent a week in the mountains, in three villages which we accessed via helicopter. 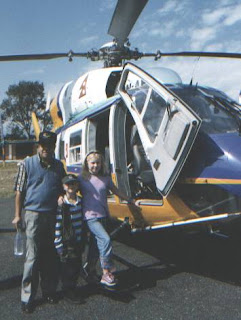 I can't decide which was more amazing -- the helicopter rides through the Himalayas, or being in a village that was a 15 hour walk from the end of the nearest road.

Thailand: I spent 10 days alone in Thailand, on vacation while the family that hired me went off doing other things. I explored Bangkok and visited the islands of Kho Phi Phi. I got lots of massages, and ate lots of Pad Thai, Pad See Ew, Pineapple on a stick, and Fried Banana Pancake.

Boston: After Stint One of the trip, I spent two months back in Boston, teaching the kids at their apartment on Tremont Street. I also got to spend the holidays with my family.

South Africa: I arrived in Cape Town expecting the family to join me shortly, but ended up with 10 days on my own. When they finally arrived, I taught for about a month, exploring the city of Cape Town alone and with my pupils. Singapore: We had an eight hour layover in Singapore. It was long enough to take a nap in a hotel, take a walk, get ice cream, and then hire a cab to take me around the city. 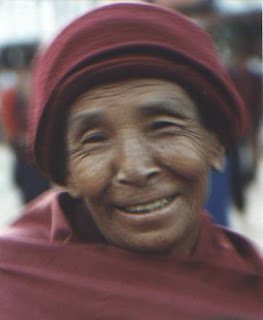 Pakistan: I was lucky enough to spend 10 days or so in Pakistan, which I thought would be scary, but in fact was where I met some of the friendliest, kindest people. I taught in Lahore for the first half, and then traveled alone to Karachi, where some friends of friends hosted me. Highlights: I got to go to a rooftop party celebrating the Basant Kite Festival and the U.S. Drug Enforcement Department, and I went "crabbing" in a Karachi harbor, eating fresh caught crab right on the boat, Pakistani style.

India: I said goodbye to my employers in India, and stayed there for another 3 months. During this time, I spent o 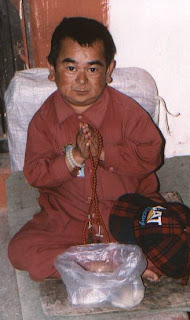 ne month in Dharamshala, attending the Dalai Lama's public teachings and exploring the cooking, birds, and culture of the Lower Himalayas. After this, I met up with a friend and we traveled together to the Taj Mahal, a bird sanctuary in Bharatpur, the pink city of Jaipur, and the holy lake in the desert at Pushkar. After a brief stop in my base, Delhi, I traveled all the way east to West Bengal -- a 36 hour trainride -- with my friend from Dharamshala, a Mongolian refugeee named Dugar. After a little exploring of the area, my last adventure was one month volunteering at a Buddhist School in Sikkim. I lived with 45 Sikkimese girls in a school hostel, and taught English and other subjects during the day. It was an amazing experience that I will never forget.

Gallery of Photos from Nepal 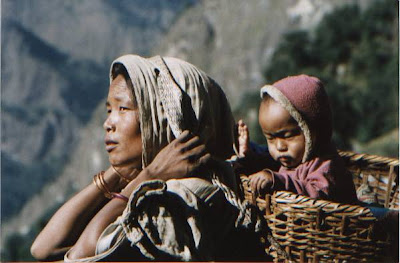 My favorite photo from Nepal...
The people are so beautiful; they make the photographer's job very easy! 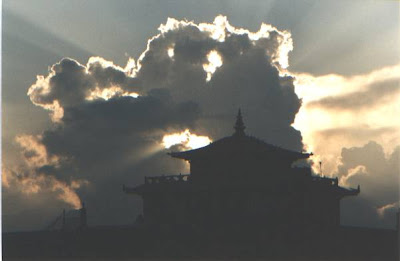 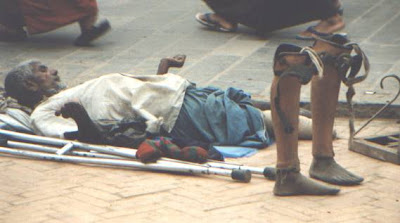 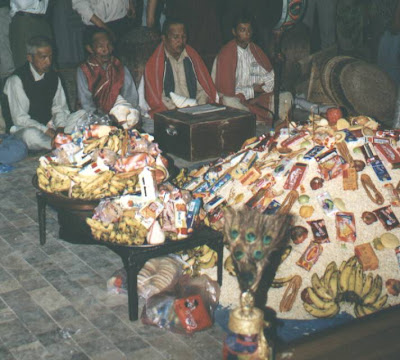 Monks praying over an offering 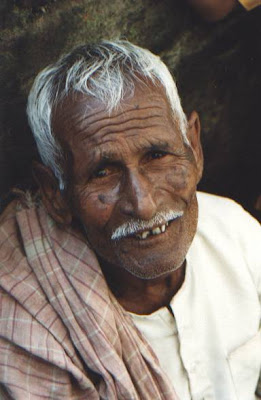 Grandfather of Mala and Delip, friends met in Durbar Square 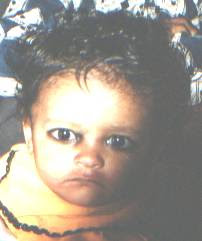 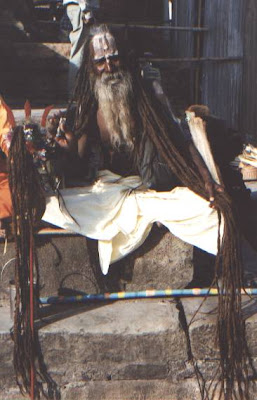 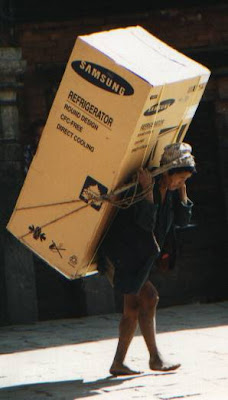 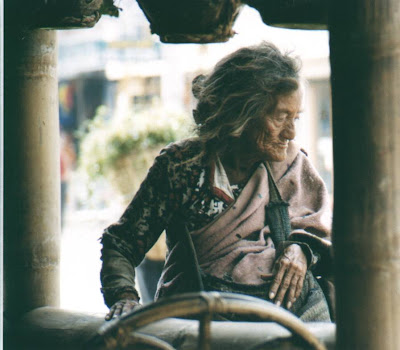 Beggar in Pokhara, who I gave my tomotoes 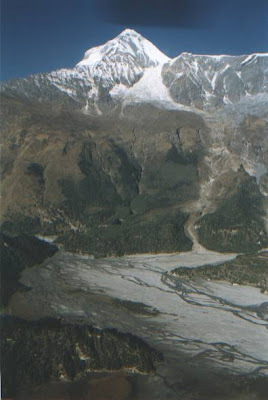 View from the Helicopter, flying somewhere near the Dhauligiri Range in the Himalayas 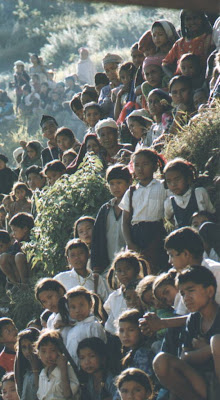 The people gathered on the mountainside to greet our helicopter. 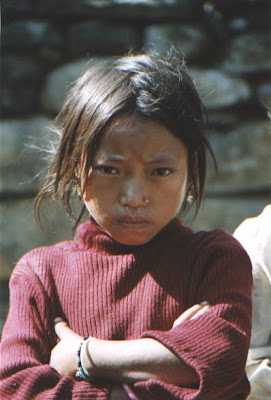 Faces of Dagnam I (Village in the Mountains) 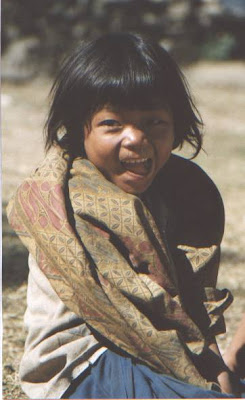 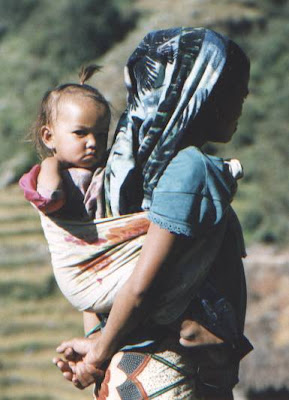 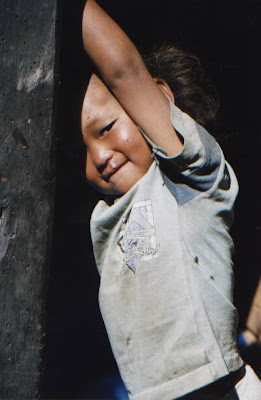 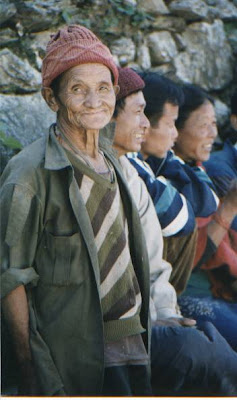 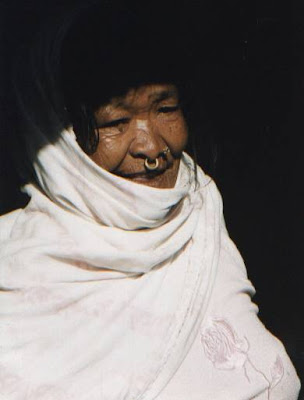