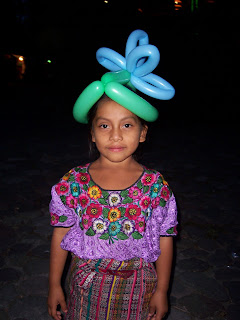 So, the other day after class, I walked down to the lake and sat down next to the boat

drivers´ hangout. I just pulled out my balloons and started twisting. It was amazing... I gathered a crowd rather quickly -- first the boat guys and then all the kids of the local merchants came running. Two little boys took on the task to be my agents, keeping the others in line. 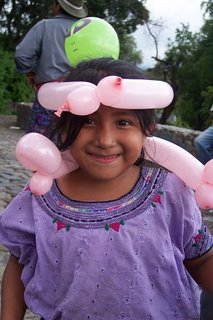 I lasted about two hours, kept going by lots of laughing. 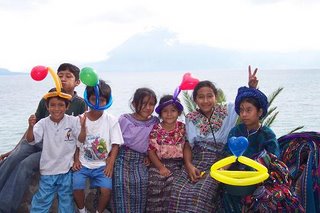 So, now balloons have been broken out! At school, I have learned all the words balloon related in Spanish -- balloon, pop, break, hat, etc. Today, we went up to a small Indigenous village called San Andres, and I did balloons for some kids there. So fun, except it started to pour while we were there, and so we were sopping wet when we finally gave up to go have a coke in a small hole in the wall where our only company was a drunk who kept banging on the table. 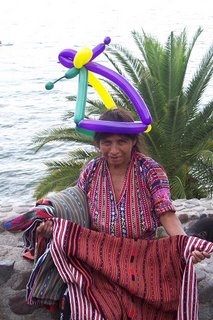 I have begun to research two projects -- one, I talked to the school director about volunteering somewhere, and Fri 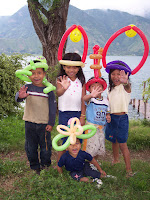 day morning I am going to go check out a possibility with my teacher, Aura. It´s a center for poor people, with a part for physical therapy and an education component as well. Two, I am trying to learn about Guatemalan history, and tomorrow Aura is going to bring in some books with famous Guatemalan legends, and I´ll try to read them (in Spanish, if I can).


Zunil: Home of the Mannequin Saint

It´s not true that everything in Lonely Planet is touristy. The hours of sitting in a bus this weekend felt worth it for my fifteen minutes in Zunil.

After a great weekend in Xela, I set out on a bus for Zunil, where I had heard the indigenous people worship a strange figure named San Simon. I was the only non-local on the camioneta (chicken bus). 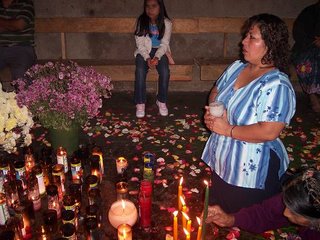 Upon arrival, I had to cross a bridge over a river where some people were doing what appeared to be appropriate: throwing their bags of trash from their car into the water. I followed a friendly woman on her way to the market, which began the part of the walk dominated by flies everywhere. I passed the Catholic church which was jam packed, people streaming out the door. Well, despite the clear Christianization here, there was more to see... I did as I was told and asked around: "Donde esta la casa de San Simon?" because apparently they move him around. I asked many people who kept telling me to go further up and up. Finally, I found him.

I was told it is a mannequin that fell off a bus years ago, and the local people believed he was sent from the Gods. He´s quite a sight. A plastic figure, adorned with sunglasses, a man purse (popular here), a gangster bandana over the mouth, American flag towel o 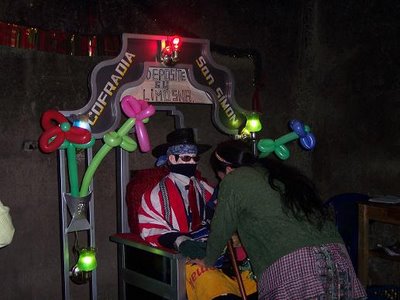 ver his shoulders... I watched as people bowed down to him, whispered prayers in his ear, prayed to him, lit candles for him, and delivered flowers to him. One woman poured alcohol down his throat (apparently common -- they had to tilt the whole thrown back). Another brought a huge bag and covered the whole room with rose petals. I decided it was necessary to leave balloon flowers for him, which others seemed to nod at, signaling that this was an appropriate offering. The whole thing was amazing. I wish I could give more background about what the story is, but I´d have to do some further research. All in all, it was pretty unbelievable to see. I made my way back down and then spent many hours on the bus to get home with a brief stop in a small village called Almalonga, where I walked through the market.

I started volunteering at Fundabiem, working with a speech therapist. The center has 24 locations in Guatemala and it is totally privately funded. There is speech therapy and p 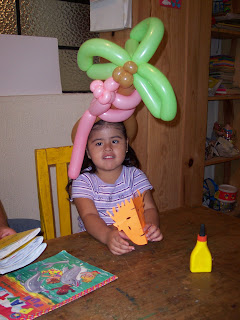 hysical therapy, and individuals come in once or twice a week who can´t afford any

thing on their own. I´m spending mornings working with the speech therapist and helping kids practice speaking, stick out their tongue, adults who are learning to write... different activities. At 10 there is a break when all the clinicians eat and a Cuban physical therapist teaches me Spanglish in b 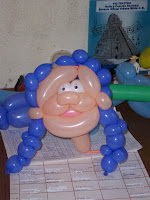 etween times when I have no idea what anyone is talking about. 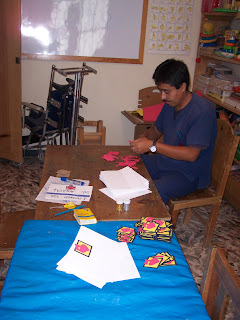 Marvin, who I work with, says that a lot of it is due to poor conditions during birth -- in the home or in a bad hospital. A couple came in today with their two and a half year old daughter who can´t speak or walk and they don´t know why. It was interesting to see the interview process and Marvin recommended doctors for them. It´s really interesting to see the different types of patients. I am also doing lots of balloons still, for the kids at Fundabiem and around town. 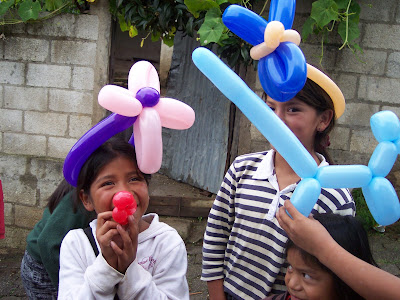 I had a great time, and I hope they did too :)
Posted by Sara